This is the complaint of 4 million to 5 million people suffering from sleep apnea recently estimated due to obesity.

What is Sleep Apnea

Obstructive Sleep Apnea Syndrome (OSAS), which is more commonly referred to as simply “sleep apnea,” is a condition in which people stop breathing in their sleep due to narrowed and obstructed airways. Obesity is often the cause of the narrowing or obstruction. People with sleep apnea experience intermittent hypoxia, or suffocating due to a lack of oxygen, during their regular sleep. This hypoxia can occur up to 15 times or more in each night’s sleep.

How Obesity Worsens It

According to the journal, “Applied Medical Informatics,” sleep apnea is extremely prominent in obese people because the excess mass on the person’s body can put pressure on their airway and close it frequently throughout the night. This forces the person to continually wake up and change positions in order to breathe. In the sleep cycle, one must be asleep for a significant period of time to get through the earlier stages of sleep prior to entering REM (rapid eye movement) sleep, the mode of sleep in which one’s body rejuvenates during the night. When sleep apnea forces people to continually wake up during the night, REM sleep cannot be achieved. Lacking REM sleep can be debilitating and leaves people feeling groggy and tired upon waking up and throughout the entire day.

The primary treatment is the CPAP machine, which helps keep the airway open during sleep with pressure. However, as the machine must be connected with large tubes to headgear, which is strapped onto one’s face while they are sleeping, it can be very cumbersome and uncomfortable to wear at night. Undergoing a surgical weight loss option, like those offered at New You Sleeve, can significantly reduce your risk for sleep apnea and allow you to sleep soundly and finally feel well rested.- Jamie Clarke 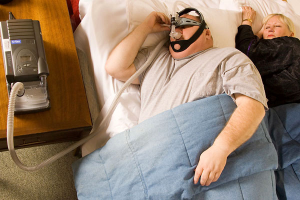 CPAP can help but is cumbersome