Genetics and Obesity: A Link Exists

Recently scientists have discovered a genetic pathway that predisposes us to store energy from food as fat instead of being burned as fuel for our bodies. Could disabling this genetic pathway stop our bodies from accumulating fat and help prevent obesity?

Has the miracle cure for obesity finally arrived? 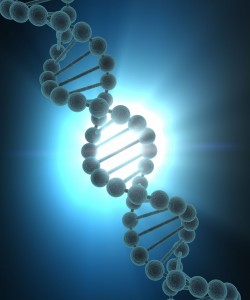 A breakthrough with genetics to cure obesity?

The link between genetics and obesity has been well known for years and only now is it being tied to how it relates to obesity and the complexities surrounding it.  While some researchers and commercial enterprises are already clamoring at the possibility of the next new multi-billion dollar pill to cure obesity, we realize that obesity is a complex disease with many associated factors. There are several interesting findings associated with this genetic discovery but the reality of it helping any time soon in the fight against obesity is very slim. It does help uncover the relationship of the distribution of fat and the regulation of one’s appetite but being able to alter this gene is no where in the near future. Fat distribution that occurs around the abdomen is especially alarming and is associated with a higher risk of developing other related diseases.

The reality is that the gene only predisposes you to obesity and does not necessarily cause it. In fact, people who had the gene twice in their genetic code only weighed 7 pounds more than the person who did not have the gene at all.

Developing a drug to affect a single gene without causing other unwanted results is a very difficult task.  That’s part of the reason why new medications require many years of development and testing.  Even when a drug is released, it may have potential serious side effects for some people and won’t be the right answer for everyone.

What is the take from all of this? As we know, there are many benefits to losing weight and it is never too early to start.  Do not wait for a pill to change your genetic makeup and solve your obesity problem; take control of your life today, find support, research your options, and understand that transforming your life from obesity is a life long fight.